Smart contracts have revolutionized the core sectors of our economy and consequently our lives. These includes trade finance,  securities, data recording, insurance, property ownership, mortgage and the list goes on. It is not only the number of areas but also the market size is significantly large. Smart contracts are self-executing contracts with the terms of the agreement between two or more parties being directly written into lines of code. In this blog, I am going to illustrate how to develop, deploy and test Ethereum smart contracts written in Solidity.

Every delicious recipe starts with collecting and preparing the ingredients before we start cooking them. Today, we are also going to use multiple tools and technologies for our smart contract recipe. Let’s begin with them first.

Truffle is a development environment, testing framework and asset pipeline for Ethereum blockchains. It contains all the tools to quickly start a personal blockchain, test and deploy smart contracts.

Ganache will be used to create personal blockchain for Ethereum development.

How to Write Smart Contract?

Solidity is the most popular language to write Ethereum smart contracts. It is an object-oriented and high level language. Below, you find a simple contract called MyStatus written in the Solidity.

The contract has a variable named status which stores the current status. The constructor set the status to Busy when the contract is deployed. The functions getStatus and setStatus can be utilized to get and change current status respectively. I have uploaded the smart contract and configuration scripts in the github repository. For the following tasks, clone the repository. The commands are following.

How to Run Dev Blockchain Network?

It shows the output similar to following.

It generates 10 accounts for developments at the start and all accounts are loaded with 100 ETH. Here, in the output only 4 are shown. Now, you have your own blockchain network running on your machine. The command also makes a HTTP RPC server on port 8545. You can interact with it on http:127.0.0.1:8545, for an instance following request returns 10 accounts associated with it. You can fine list of supported methods in the ganache-cli repository.

There is one more way to do the same. I find it simpler. You could use truffle to spawn a blockchain network. The command is following.

It also creates 10 accounts and HTTP JSON RPC server but the server runs on port 9545.  Furthermore, it opens a truffle console where other truffle commands can be run to interact with the blockchain network.

How to Test the Smart Contract?

The tests can be written in Solidity or Javascript. I have written the tests in the Solidity. You can find them in test directory. You have to take care of port in the truffle.js file while executing the tests. As I mentioned earlier the ganache-cli and truffle runs the HTTP server on port 8545 and 9545 respectively. Make the change accordingly before executing the following command

It will output similar to shown below:

How to Compile and Deploy Smart Contract?

The deployment logs will be similar to following: 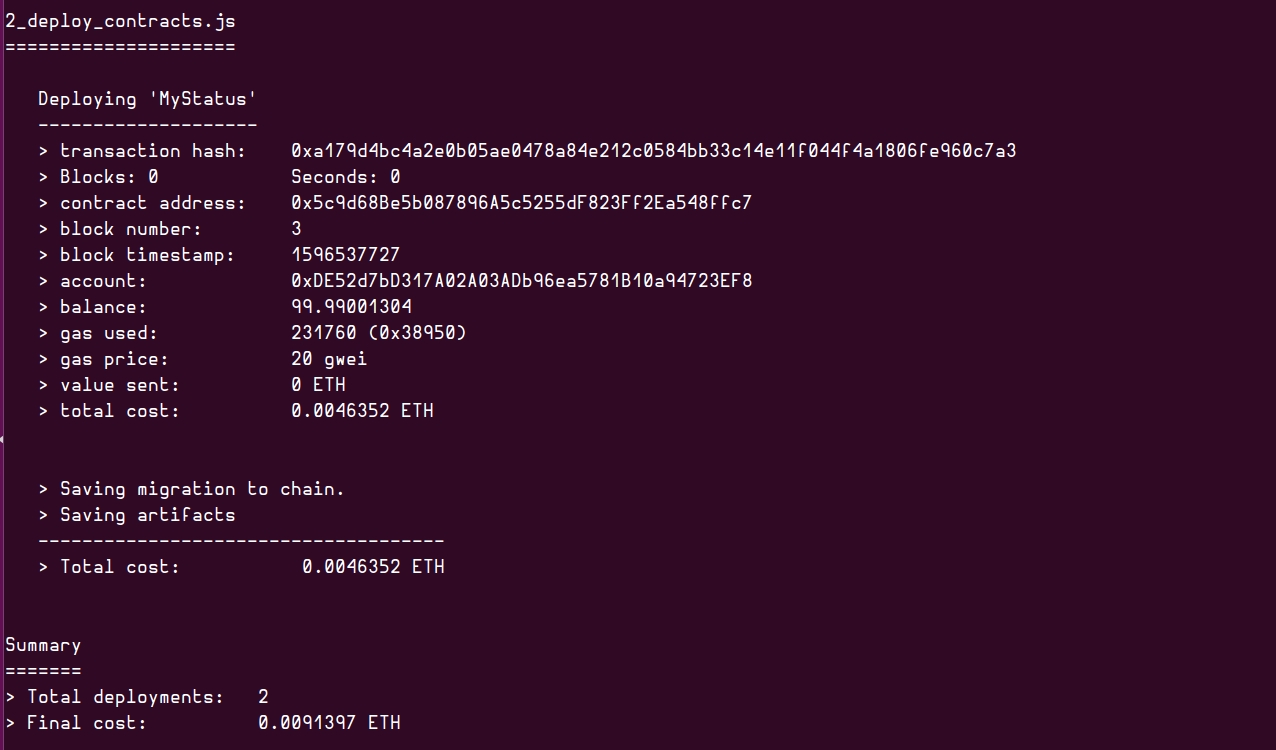 If you have used truffle develop to start the blockchain network then you could execute compile and migrate commands without truffle directly in the truffle console as shown below.

How to Interact With the Smart Contract?

You can utilize truffle console to call the functions defined in the smart contract. If you have used ganache-cli to spawn the blockchain network then execute following command to open the console. In the case of truffle develop, it automatically opens the console.

The truffle console is the easiest method to interact with your smart contract. Use the following commands to call the functions of MyStatus smart contract.

The output from the above commands will be similar to following.

You could find the complete truffle console logs in the repository for the reference. With this, our recipe is complete.